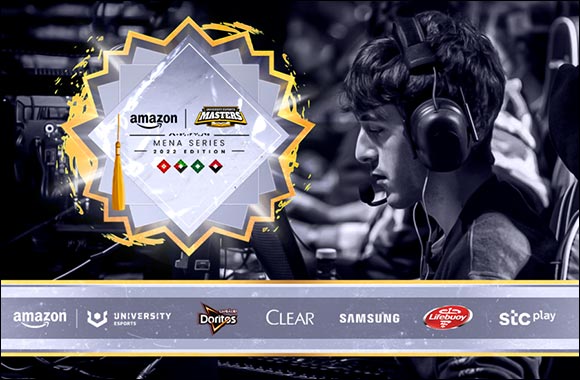 Share Home >> Technology
■ In the finals, hosted in Abu Dhabi from July 14-17, the UAE teams will face students from KSA, Egypt and Morocco, with whom they will share a total prize pool of $10,000
■ 168 universities, 1,700 teams and more than 8,600 players from these countries have been competing since November to reach these finals
Dubai, UAE, July 12, 2022.- A total number of eight UAE universities are ready to participate in the first edition of the Amazon UNIVERSITY Esports Masters MENA Series (Amazon UEMasters), which is taking place in Abu Dhabi from July 14-17. They will compete against teams from KSA, Morocco and Egypt to win the title of champions, as well as part of the shared prize pool of $10,000 (i.e., $5,000 for the winner of each competition) at stake in this phase.
The students from the Higher Colleges of Technology, University of Wollongong in Dubai, United Arab Emirates University, American University of Sharjah, and Abu Dhabi University will face their rivals in League of Legends within the team Mystic, while students from University of Birmingham, Curtin University Dubai, United Arab Emirates University, and Abu Dhabi University, and Heriot-Watt University will aim for victory in VALORANT, under the name Zoomers.
In League of Legends, Mystic will compete in the Summoner's Rift against the following opponents: Goon uni squad (Jubail University College, Taif University, University of Jeddah, King Abdulaziz University, University of Business and Technology), from KSA; We can do anything (Suez University, Port Said University), from Egypt; and Olympus Gaming (Al Akhawayn University, Mohammed V University, Ecole Normale Supérieure and Institut Supérieur du Génie Appliqué) from Morocco.
Likewise, Zoomers will have to demonstrate their warfare skills in VALORANT against UQU valorant (Umm Al-Qura University, King Saud University), from KSA; Team 2G (Ibn Tofail University, Sidi Mohamed Ben Abdellah Univ., EMSI: Ecole Marocaine des Sciences de l'Ingénieur, OFPPT: L'Office de la formation professionnelle et de la Promotion du Travail), from Morocco; and Qlash (Alexandria University, Helwan Univ., Zagazig Univ., October 6 Univ., and New Cairo Academy), from Egypt.
These countries have shown rapid growth and high demand for modern games, and are steadily becoming some of the best markets to support and enhance the gaming industry. Thus, and thanks to MENATech Entertainment, Amazon UEMasters, which is one of the top esports tournaments within the academic ecosystem worldwide, is now a reality in the MENA region.
These finals, which will be streamed live on www.twitch.tv/universityesportsuae (English) and  www.twitch.tv/universityesportsksa (Arabic), will also include other activities, such as viewing parties with local streamers and influencers. Also, after a collaboration with Abu Dhabi Gaming, they will co-stream the live competition on their channels (www.twitch.tv/abudhabi_gaming).
A sector in continuous growth in the MENA region
Since its inception, Amazon UNIVERSITY Esports has witnessed the enormous expansion of the esports sector, not only as a competitive discipline but also as a booming job market. In 2022, the global esports audience is forecast to reach 532 million and those in emerging regions, which includes MENA, are predicted to continue to rise, going from 83.6 million in 2021 to 95.5 million in 2022. Competitions of this level have served as an entry vehicle for young skilled professionals, gamers, creatives and, in general, innovators in this thriving industry.
In the MENA region, this last season of the Amazon UNIVERSITY Esports competition has been outstanding. It had representatives from approximately 170 universities, 1,700 teams and more than 8,600 players from these four countries who have been competing since November 2021 to reach these finals.
The organization of the first edition of this championship in the MENA region has been made possible by the support of companies such as the most important publisher, Riot Games, which has collaborated with GGTech in university competitions worldwide from the very beginning, and sponsors who accompanied us through this first-year competition in each market as Samsung, Clear, Doritos and STC in KSA, as well as Samsung and Lifebuoy in the UAE.


900 Global and Local Brands and Exhibitors At The Watch & Jewellery Middle East ...

Maserati Celebrates The Opening Of Its New Store In Milan

Redefining The Household Routine With LG

IIFA To Pay Tribute To The Greatest Superstar Of Indian Cinema - Amitabh Bachcha ...

The Environment Agency - Abu Dhabi Aims to Change the Emirate's Future with Its ...

Tadweer Produces More Than 1 Million Tons Of Products Recycled From Waste During ...

Up To $85 Billion Needed In Investments To Achieve Sustainable Waste Management ...