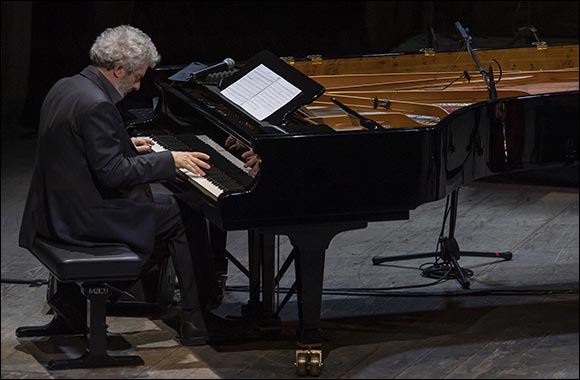 “La musica è pericolosa – concerted” is a freewheeling journey through music, a narrative in which music and words intertwine to describe the paths that have led Nicola Piovani – an internationally renowned Italian artist and Oscar-winner for the soundtrack of Roberto Benigni’s “La vita è bella” (“Life is Beautiful”) – to collaborate with De André, Fellini, Magni, as well as with other Spanish, French and Dutch filmmakers, and to compose music for the theatre, cinema, television, singers and instrumentalists.  The concert will feature unpublished theatrical pieces interspersed with better-known scores, rearranged for the occasion. On the background, videos integrate the narrative with clippings from films and performances and with the images that artists like Luzzati and Manara dedicated to Piovani’s musical work.

Jazz Lag are a collective of musicians active on the Brianza and Milanese scene since 2004, which with different ensembles, from a trio to an orchestra of ten elements, offer shows with a strong musical, scenographic and choreographic impact. Their repertoire traces the great classics of the history of jazz and swing, from Louis Armstrong to the glories of the Swing Era, through the compositions of his Italian and American masters, with sounds that meet pop, Latin rhythms and gypsy sounds.

By popular demand, IL VOLO arrives for the first time in concert at the Millennium Amphiteatre in Dubai, 5 years after their first performance in the city at the 2016 Globe Soccer Awards. 'Il Volo Live in Concert' will be a unique event in which Piero Barone, Gianluca Ginoble and Ignazio Boschetto will retrace their careers bringing the best of their repertoire to the stage: from the bel canto of the Italian tradition, such as the iconic song ''O Sole mio', to the American evergreens, such as 'My Way', from the single with who won the 2015 Sanremo Festival “Grande amore”, to the famous Turandot romance “niente dorma”. There will be some excerpts from their latest album 'Il Volo sings Morricone', an overwhelming journey into the art of one of the greatest composers of the twentieth century. A lineup structured as a best of that encompasses the careers of three unique voices who have crossed national borders by selling millions of records and climbing the world rankings.

Next in Events & Exhibitions