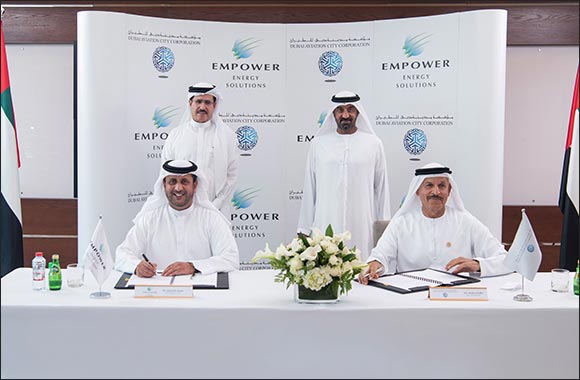 Share Home >> Energy and Industry
• The largest deal of its kind in the acquisition of airport district cooling systems
• HH Sheikh Ahmed bin Saeed Al Maktoum: The acquisition is the first fruit of the new PPP portfolio
• HE Saeed Mohammed Al Tayer: The deal marks new success for Dubai Demand Side Management Strategy 2030
• HE Khalifa Al Zaffin: The strategic partnership with Empower is a testament to our ambitions to deliver streamlined operations at DXB and continue the path of high growth.
• Ahmad Bin Shafar: Empower is unique in partnering with largest institutions and mega projects
Dubai, United Arab Emirates - 02, November 2021: In the presence of His Highness Sheikh Ahmed bin Saeed Al Maktoum, President of Dubai Civil Aviation Authority, Chairman of Dubai Airports, Chairman and Chief Executive of Emirates Airline & Group and the Chairman of the Dubai Supreme Council of Energy; Emirates Central Cooling Systems Corporation (Empower), the world’s largest district cooling services provider, signed an agreement to acquire the district cooling systems of Dubai International Airport, with a total cooling capacity of 110,000 refrigeration tons (RT), for a total value of AED 1.1 billion, through a combination of internal accruals and debt financing from local and international banks which Empower has close strategic relations.
His Excellency Saeed Mohammed Al Tayer, Managing Director and CEO of DEWA and Chairman of Empower was also present at the signing ceremony and the acquisition agreement was signed by Ahmad Bin Shafar, CEO, Empower and His Excellency Khalifa Al Zaffin, Executive Chairman of Dubai Aviation City Corporation (DACC).
Under the acquisition agreement, Empower will own and manage all the existing District Cooling infrastructure of Dubai International Airport, with all its facilities and complexes, with a capacity of up to 110,000 RT that include five units, and this capacity covers the equivalent of 11 times the consumption of Burj Khalifa, the world's tallest tower.
HH Sheikh Ahmed bin Saeed Al Maktoum, said: 'The deal is part of the AED 25 billion Public-Private Partnership (PPP) project portfolio announced by the Government of Dubai's Department of Finance (DOF) at the Dubai International PPP Conference which was held last month at the Expo 2020. With this acquisition, the Dubai Aviation City Corporation has made a big leap through its partnership with Empower, the global leader of the environmentally friendly district cooling industry and in adopting innovative technologies.
He added: 'The deal supports the DACC's continuous endeavors to achieve its ambitious strategy emanating from both the UAE Vision 2021 for sustainable growth, and the Dubai’s unique vision to promote the values and standards of sustainability and environmental protection. Through this acquisition, both the parties seek to reaffirm Dubai's leading global position by accelerating the pace of developments by strengthening partnerships, using advanced technologies and adopting innovation in all their activities.'
For his part, His Excellency Saeed Mohammed Al Tayer, MD and CEO of Dubai Electricity and Water Authority and Chairman of Empower said: 'The acquisition is in line with the vision of His Highness Sheikh Mohammed bin Rashid Al Maktoum, Vice President and Prime Minister of the UAE and Ruler of Dubai, to consolidate Dubai's global position on the map of sustainable development. It is also an active part in the Dubai Demand Side Management Strategy 2030, of which district cooling is one of its prominent pillars.'
His Excellency explained that the acquisition agreement formulates a new concept of partnership between the two parties and transfers its investment outputs to a broader space that comprises the protection of the environment and natural resources, sustaining the momentum of creating environmentally sustainable communities throughout the Emirate, and recording unprecedented levels of performance in improving the efficiency of the energy sector, especially with regard to standards to meet the growing demand for district cooling services, which is mainly in line with Dubai's vision to be the world's most sustainable city.
His Excellency stressed that Empower, with its industrial leadership, innovative technologies and quality of expertise in the environmentally friendly district cooling industry, has high regard to its partnership with DACC, as a major player in the global aviation industry. 'Empower plays an eminent role in the Dubai's economic development, and is striving to strengthen its leadership in the district cooling industry locally, regionally and globally, to reaffirm the extent of the growth and prosperity in Dubai's industrial sector, that is rich in investment opportunities and ability to permanently develop and expand the scope of investment activities related to the present and future of the vital district cooling sector.'
His Excellency Khalifa Al Zaffin, Executive Chairman of Dubai Aviation City Corporation (DACC) said 'We are immensely proud of what we have achieved within the DACC Group and our contribution to help establish the Emirate of Dubai as the foremost global aviation hub, with DXB firmly established as the largest international airport in the World. This strategic partnership with Empower is a testament to our ambition to deliver streamlined operations at DXB and continue the path of high growth. I am certain that Empower will serve Dubai International Airport according to the highest industry standards”
For his part, Ahmad bin Shafar, said 'We see the acquisition as a long-term partnership with a reputable institution of significant importance on the developmental and economic levels, and Empower is ready with its teams to assume the responsibility imposed by this partnership and looks forward to fulfilling it to the fullest.'
He pointed out that Empower's superiority and leadership in the district cooling industry and its remarkable success in adopting unprecedented technology in operations, production and provision of services, has made it a unique strategic partner for the largest institutions and mega projects, the latest of which is the Dubai International Airport with all its facilities and complexes. Currently Dubai International Airport is one of the busiest airports for international travel, with 25.9 million passengers being handled last year. In 2019, it saw 86.4 million passengers, and it targets 56 million passengers for the next year, making one of the world’s busiest airports.

Previous in Energy and Industry

Next in Energy and Industry


900 Global and Local Brands and Exhibitors At The Watch & Jewellery Middle East ...

Maserati Celebrates The Opening Of Its New Store In Milan

Redefining The Household Routine With LG

IIFA To Pay Tribute To The Greatest Superstar Of Indian Cinema - Amitabh Bachcha ...

The Environment Agency - Abu Dhabi Aims to Change the Emirate's Future with Its ...

Tadweer Produces More Than 1 Million Tons Of Products Recycled From Waste During ...

Up To $85 Billion Needed In Investments To Achieve Sustainable Waste Management ...