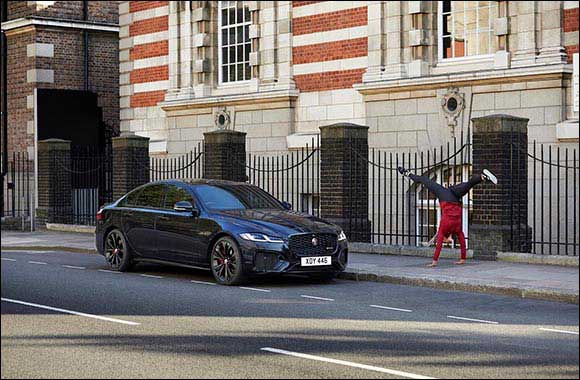 Share Home >> Automobile
• Hottest ticket in town: Jaguar Racing’s Mitch Evans embarks on a race across London to be amongst the first to see the early anticipated James Bond film, No Time To Die, released in the region on 07 October.
• The thrill of the chase: Behind the wheel of Jaguar’s latest XF Saloon, Evans is pursued across the British capital by renowned free runner and Parkour athlete Lynn Jung
• Serenity in the city: The XFs luxurious cabin featuring Active Noise Cancellation and Cabin Air Ionisation technology provides a tranquil sanctuary for Mitch Evans as Lynn tackles the busy streets on foot
• Agility and composure: Jaguar’s all-wheel drive system with Intelligent Driveline Dynamics, and lightweight aluminium-intensive architecture deliver exceptional handling and agility together with outstanding ride, comfort and refinement for the drive across town
• No Time To Die XF film debut: Two Jaguar XFs make their Bond debut in No Time To Die
September 27, 2021 - Dubai, United Arab Emirates:  To mark the eagerly anticipated release of No Time To Die, Jaguar’s latest XF Saloon found itself involved in a thrilling chase across London, as Jaguar Racing’s Formula E driver Mitch Evans aimed to be amongst the very first to see the film.
The action is set against some of the capital’s most iconic landmarks including the Shard, Tower Bridge, City Hall and Millennium Bridge. Mitch, who is at the wheel of the Santorini Black XF R-Dynamic HSE, is unaware he is being pursued by free runner and Parkour athlete Lynn Jung. The reason for their chase? He has unwittingly dropped his tickets to the screening and Lynn is determined to ensure his wait to see No Time To Die is over.
The six-mile chase starts in Laffone Street, close to Tower Bridge, and weaves its way across the city with Lynn running, jumping and somersaulting in pursuit of Mitch, who is enjoying the XF’s luxury, comfort and serenity thanks to its Active Noise Cancellation and Cabin Air Ionisation technology.
Distanced from the noise and chaos of the city around him, Mitch focuses on the drive, making the most of the XF’s precise, intuitive steering – and the responsive, refined performance of its 300PS Ingenium engine. The action concludes in London’s famous Baker Street, where the tickets are returned in spectacular style, allowing Mitch to finally enjoy No Time to Die.
Throughout the race across town, 007 fans will spot a few familiar faces along the route, including a bullet-holed XF from No Time to Die as well as notable Jaguar models that appeared in past films, including the C-X75 from Spectre (2015) and the XKR Convertible from Die Another Day (2002).
Anna Gallagher, Jaguar Brand Director, said: “The Jaguar XF is a car designed to tackle any journey with an unrivalled balance of luxury, comfort and refinement. Whether it’s a high-speed pursuit through twisting streets and piazzas of Matera where the car filmed it’s No Time To Die chase sequences, or the bustling streets of London – the XF really is a car for every occasion”.