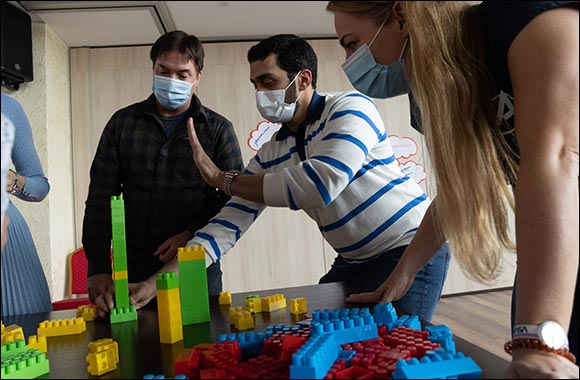 Share Home >> Education & Training
The crew to continue training as part of Emirates Space Simulation Project
Dubai, UAE - 27, September 2021: The Mohammed Bin Rashid Space Centre (MBRSC) today announced that Abdallah AlHammadi and Saleh AlAmeri, the two Emirati CREW ONE analog astronauts, will continue their training as part of the Emirates space simulation project within the Scientific International Research in Unique Terrestrial Station (SIRIUS) 21/21 mission.
The mission slated to begin in November, this year, is set to simulate life in space over an eight-month period at the Ground Experimental Complex of the Russian Academy of Sciences’ Institute of Biomedical Problems in Moscow, Russia.
The two analog astronauts form part of CREW ONE (one primary, one backup) and their task will be to study the psychological and physiological effects of isolation on humans and team dynamics to help prepare for long-term space exploration missions. Recently, they were trained on how to construct and maintain the space facilities they will be using along with different pre mission experiments. During the mission the CREW ONE astronauts will conduct over 60 different experiments across a wide range of physical, psychological, immunological, and other tests.
H.E. Yousuf Hamad AlShaibani, Director-General, MBRSC said: 'With the announcement of the start of the SIRIUS mission in November, we at the MBRSC were keen to select and equip our astronauts according to strict mission protocols based on standards established with our international partners. They will carry out some of the experiments presented by some universities in the UAE as part of our agreement with the scientific community in the country.”
Meanwhile, Adnan AlRais, Mars 2117 Programme Manager, MBRSC said: “The mission of simulating life in space is of great importance as it will enable us to ensure the safety and health of astronauts during long-term space exploration trips. This mission will not be limited to the Mars 2117 project, but will cover the entire Emirates Astronaut Programme, to include manned missions that our astronauts will carry out in the future as well as other ambitious space programmes as envisioned by our leaders.”
The UAE’s participation in the SIRIUS mission will play a pivotal role in developing the country’s capabilities and will contribute to strengthening the Mars 2117 program, which aims to establish human settlements on Mars by 2117. The Mars 2117 initiative is funded and supported by the ICT Fund of the Telecommunications and Digital Government Regulatory Authority.