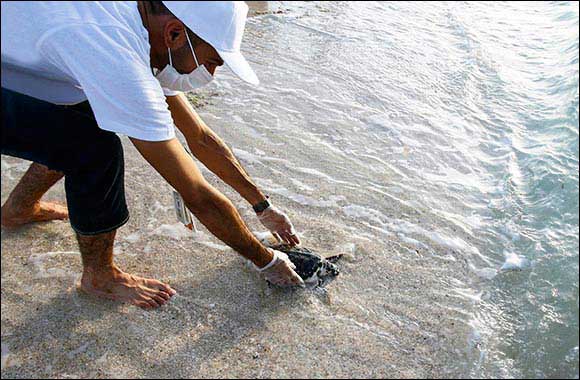 EAD and Nawah Released Rescued Turtles Back into Their Natural Habitats

Abu Dhabi - 01,  August 2021:  As part of an ongoing partnership, The Environment Agency – Abu Dhabi (EAD) and Nawah Energy Company, the Joint Venture nuclear operations and maintenance subsidiary of Emirates Nuclear Energy Corporation (ENEC), have released a group of rehabilitated turtles into Abu Dhabi waters in Al Dhafra region. This partnership reflects the dedication of EAD, ENEC and Nawah towards the conservation of biodiversity, as well as their commitment to the local environment.

The turtles were initially rescued by Nawah’s team of environmental volunteers, who conduct regular checks of the beaches that surround the Barakah Nuclear Energy Plant. Following their rehabilitation, in partnership with National Aquarium, 17 turtles were released back into their natural marine environment by the teams of EAD and Nawah during a special release gathering, attended by Eng. Ali Al Hammadi, Chief Executive Officer of Nawah, and Ahmed Al Hashmi, Acting Executive Director, Terrestrial and Marine Biodiversity Division of EAD.

Ahmed Al Hashemi on the occasion said: “There are several energy organisations that have placed environmental activities at the top of their agenda and Nawah is a prime example of leadership in the conservation space. Throughout our partnership, its team has shown their utmost devotion to the preservation of the environment. This has primarily been reflected in the great lengths they have gone to in rescuing distressed turtles, and joining us in releasing them back into the wild so they can thrive once again.”

Al Hashemi also added: “We will continue this partnership with Nawah and have future plans to release more turtles, as well as fulfil other long-term environmental initiatives.”

Since June 2021, the Environment Agency – Abu Dhabi has taken part in three turtle release programmes. The first event involved the release of 150 sea turtles to their habitats after rehabilitation, and in the second a large group of previously rescued turtles were released at Saadiyat Rotana in celebration of World Sea Turtle Day. The Agency plans on releasing more than 150 turtles, with some tagged with satellites to monitor their behaviour, habits and migration paths.
Abu Dhabi is home to 5,500 marine turtles – both Green Turtles and Hawksbills, and the occasional loggerhead. With the Green Turtles and Hawksbills being the two predominant species found in the Emirate’s waters and have been monitored by a longstanding research programme founded by the Agency in 1998.
EAD also produced a feature documentary that was filmed over a period of two years, titled ‘Wild Abu Dhabi: The Turtles of Al Dhafra’. The film was screened for the first time in January at Yas Mall, and highlights the inspiring and insightful work of the EAD team dedicated to studying turtles in the Arabian Gulf – an area also known as the ‘world’s natural climate change laboratory’.