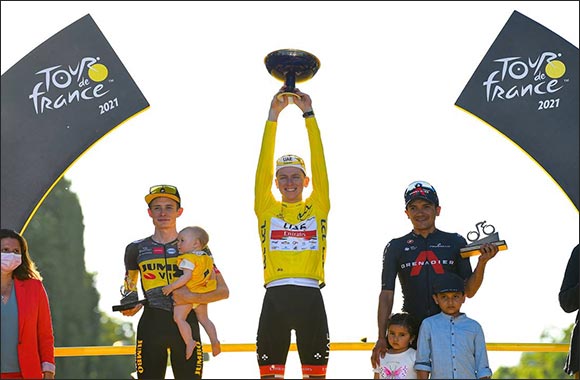 Share Home >> Entertainment
His Highness Sheikh Nahyan bin Zayed Al Nahyan congratulates Pogacar and the team
July 20, 2021:  A faultless final Tour de France stage saw Tadej Pogacar cross the line safely and claim a second successive Tour de France title. The 22 year old UAE Team Emirates starlet made history by becoming the youngest rider to wear the overall leader’s yellow jersey at the end of the race for two year’s running.
Pogacar’s imperious performance cemented his place as the best Grand Tour rider in the world and won the plaudits of many in the UAE:
His Highness Sheikh Nahyan bin Zayed Al Nahyan, Chairman of the Abu Dhabi Sports Council said: ““I would like to congratulate His Highness Sheikh Khalifa bin Zayed Al Nahyan, His Highness Sheikh Mohamed bin Zayed Al Nahyan, Crown Prince of Abu Dhabi and Deputy Supreme Commander of the Armed Forces, and His Highness Sheikh Tahnoun bin Zayed Al Nahyan, National Security Adviser, on the historic achievement of the UAE Team Emirates. Tadej Pogacar’s victory, in the most famous and toughest race in the world was made possible thanks to the nation’s leadership and tireless efforts of the whole team. I would like to thank the team for their efforts in raising the name of the UAE in the cycling world and confirming their lofty status as one of the best teams in the world.”
The fearless Slovenian dominated the Tour, winning three Stages, wearing the yellow jersey since Stage 9 of the race and becomes the youngest rider ever to win back to back Tours. There were early race attacks by his GC rivals but, since his stage five time-trial victory, Pogacar has not looked back.
Attacks against him in the mountains were few and far between, and when riders such as the surprising Vingegaard (Jumbo-Visma) did venture off the front of the peloton, Pogacar would follow them - making a strong point that he could marshal most situations himself.
Pogacar is spearheading a new era of cycling for the UAE.
His Excellency Aref Hamad Al Awani, General Secretary of Abu Dhabi Sports Council said: ““The victory achieved in France is a reflection of our national strategy to promote a healthier lifestyle which is one of the priorities for the UAE government. The team has become a source of inspiration for many local cyclists and acts as strong motivation for the younger generation of the UAE to become professionals. The success of the team is a clear indication of the hard work and planning of the organisation and we are immensely proud of the team who are raising the profile of the UAE around the world.”
Champion, Pogacar said: “There has been some fantastic racing on an amazing parcours. I can’t describe how happy I am to be a part of this family. It melts my heart. I am super happy and proud to be a part of this team and part of this journey. Thank you to all my teammates.”
Tour de France: General Classification Results
1. Tadej Pogacar (UAE-Emirates) 82h 56m 36s
2. Jonas Vingegaard (Jumbo-Visma) +5’20”
3. Richard Carapaz (Ineos) +7’03”