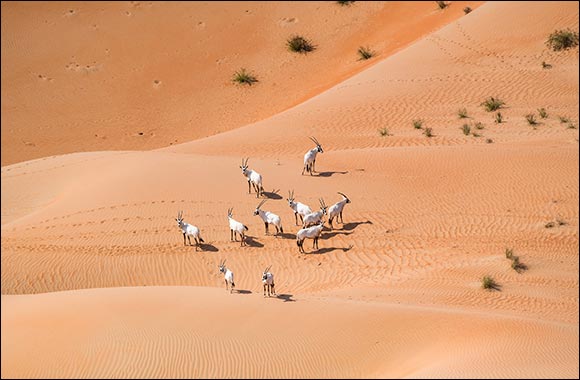 Abu Dhabi, 6 June 2021:  The aerial survey for the Arabian Oryx Protected Area, carried out by the Environment Agency – Abu Dhabi (EAD) last November, revealed a 22% increase in the number of Oryx in the Protected Area, in comparison to previous studies. This confirms the success of the Sheikh Mohamed bin Zayed Arabian Oryx Reintroduction Programme which was launched in 2007 with a goal to relocate the Arabian Oryx. Initially there was a herd of no more than 160, and today, the herd has successfully reached 946 heads.

A specialist team from EAD conducted an aerial survey study to count the number of Arabian Oryx, Sand Gazelle and other species within the borders of the largest natural reserve in the UAE, which spans an area of 6,000 square kilometers. The survey conducted is part of EAD’s commitment to preserving biological diversity in Abu Dhabi and protecting species in their natural habitat. This project marks the second comprehensive aerial survey for the Arabian Oryx Protected Area, with the first one taking place in March 2017.

The survey also aims to increase the available information on the age and sex composition of the Arabian Oryx herd. The data collected has helped EAD establish a set of technical recommendations, with the aim of improving the management of the reserves and the re-introduction programmes for the Arabian Oryx as well as other species.

Dr. Shaikha Salem Al Dhaheri, Secretary-General of EAD, said: “This survey is a major part of our efforts to preserve the Arabian Oryx, under the hugely successful Sheikh Mohamed Bin Zayed Arabian Oryx Reintroduction Programme.  Our leadership support to establish protected areas across the emirate has been fundamental to protecting species and biodiversity, which were once on the verge of extinction. Arabian Oryx is an iconic species of the desert landscape and a symbol of our cultural heritage and was almost hunted to extinction in the wild in the early seventies and only survived in captivity.”
“Thanks to extensive captive breeding of the species undertaken by the late Sheikh Zayed bin Sultan Al Nahyan, the species was saved. With this insight, he successfully launched a programme to help preserve the Arabian Oryx, increase their numbers, and relocate them for protection. His attention to the topic, continuous support, and his farsightedness are the real reasons behind the recovery of the Arabian Oryx into the wild. This project has become an example to be followed across the world and represents great success for protection and captive-breeding programmes.”

Her Excellency also attributed the next phase of conservation action and success of the program to the leadership and directions of His Highness Sheikh Mohamed bin Zayed, to reintroduce the Arabian Oryx, as part of the Abu Dhabi government's vision to establish the population of the Arabian Oryx within the region.

Ahmed Al Hashemi, Acting Executive Director of the Terrestrial and Marine Biodiversity Sector in EAD, commented: “Within the framework of His Highness Sheikh Mohammed Bin Zayed's programme to translocate the Arabian Oryx in the United Arab Emirates, there are now around 100 heads in the Houbara Reserve, which is located in the Al Dhafra region and managed by EAD.

Al Hashemi explained how the programme, which has enhanced the position of the UAE on both regional and international levels, is today considered one of the most successful species conservation programmes in the world.

Al Hashimi added: “As a result of the efforts of cooperation in the region and in coordination with international environmental bodies and organizations, several countries were able to increase the number of Arabian Oryx and reintroduce them in a number of countries in the Arab region. Through the General Secretariat for the Conservation of the Arabian Oryx, hosted by EAD, these regional efforts were crowned with unique success in 2011 when the International Union for the Conservation of Nature, (IUCN) shifted the status of the Arabian Oryx from an Endangered category to the category of Vulnerable.”
Khaldoun Al Omari, Section Manager-TPA Management and Infrastructure and Maintenance in EAD, explained: “The method of aerial surveys has been adopted to count the Arabian Oryx within the reserve to ensure the largest possible coverage of the Arabian Oryx Protected Area, within the shortest time possible, and to ensure that the results are accurate.”

“Additionally, the reserve was divided into five different parts due to the size of the study area. The study consisted of two phases, a preparatory phase, which included the preparation of the study design and the training of the participating team, and the field phase, which lasted for four days. The field phase involved carrying out 8 flights at the rate of one and a half hours per flight.”

Talking about the characteristics of the Arabian Oryx herd, Al-Omari said: “A total of 83 young Arabian Oryx calves have been recorded, which accounts for 8.8% of the total size of the herd. Also represented in the herd in the reserve, include females who formed the largest percentage of the herd size, with a total of 76.5%.”

Based on the survey, the study concluded with a series of recommendations, the most important of which was to update the zoning plan of the protected area in proportion to the distribution of the Arabian Oryx herds.

It was also recommended that the study should be carried out once every three years, and the current design of the study to be used to make the necessary statistical comparisons and to assess the status of the herds within the reserve. Also discussed was the urgency of providing periodic veterinary surveillance of the Arabian Oryx herd and to intervene in cases of necessity, which are in line with international standard requirements for the reintroduction programs.