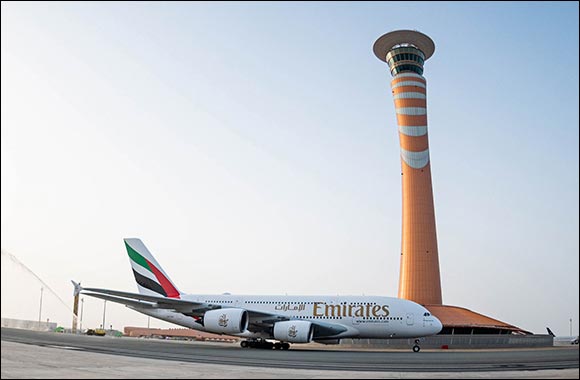 
March 30, 2021:  Emirates has made its first A380 touchdown at Terminal 1 in Jeddah’s King Abdulaziz International Airport (KAIA), making it the first airline to operate the double-decker aircraft to the Kingdom of Saudi Arabia’s latest aviation landmark. EK flight 2803 landed in Jeddah at 1810hrs yesterday and was greeted with a water cannon salute.

For the inaugural A380 flight to the new world-class terminal, Emirates deployed its latest flagship featuring the much talked about premium economy seats, as well as signature enhancements across every cabin. With a generous pitch of up to 40-inches, Emirates’ premium economy seat is 19.5 inches wide, and reclines 8 inches into a comfortable cradle position with ample room to stretch. Covered in cream-coloured leather with stitching details and a wood panel finishing similar to Emirates’ premium cabins, each seat is designed to provide optimal comfort and support with 6-way adjustable headrests, calf rests and footrests. Each seat is fitted with a 13.3” in-flight entertainment screen, one of the largest in the industry, to enjoy the unmatched array of music, movies, TV, news and other content on Emirates’ award-winning ice.

Passengers arriving on the A380 can now enjoy new amenities and services on the ground, including easy boarding and disembarkation from two-tier aerobridges for passengers travelling in its different cabins.

Mohammed Alnahari Alhashmi, Vice President, Commercial Operations, Kingdom of Saudi Arabia said: “Moving to Terminal 1 represents a significant improvement in the customer experience. Emirates customers will have access to world-class amenities, including restaurants, retail outlets, airport lounges and much more. We would like to thank the General Civil Aviation Authority, King Abdulaziz International Airport, and the local authorities who have been providing their support and working closely with us to make this move a success and ensure that Emirates passengers arriving and departing from Terminal 1 enjoy a seamless airport experience as well as best-in-class services.”

Through its passenger and cargo operations, Emirates has been supporting the Kingdom’s pandemic response by working hard to ensure the highest standards of health and safety for all of its customers and employees travelling in and out of Saudi Arabia. This has included the distribution of complimentary hygiene kits for customers, PPE protection for all of its cabin crew, regular sanitation of lavatories on all flights, deep cleaning and disinfection of aircraft, use of industrial-grade HEPA air filters, amongst numerous other biosafety measures. The airline has also stepped up to support KSA’s international trade links, and has also been instrumental in transporting critical medical supplies, vaccines, PPE, food and other supplies into the Kingdom throughout the pandemic.

One of Saudi Arabia’s largest airport infrastructure projects, KAIA’s new Terminal 1 supports the significant investments the Kingdom has made in aviation, as part of KSA Vision 2030, to diversify its economy, forge broader trade and tourism links and transform its place as a global hub connecting Asia, Europe and Africa.

KAIA Terminal 1 is one of the largest terminals in the Kingdom, and has the capacity for handling 30 million passengers a year, combining both domestic and international flights. It is able to accommodate up to 70 aircraft simultaneously, including the Airbus A380. KAIA also boasts the tallest air traffic control tower in the world at 136 meters. Helping serve as a gateway for Hajj and Umrah pilgrims, Terminal 1 is connected to Haramain high-speed railway and passengers can seamlessly travel to Medina and Mecca.

United in Ramadan: Celebrate the Essence of Ramadan with Mall of the Emirates a ...