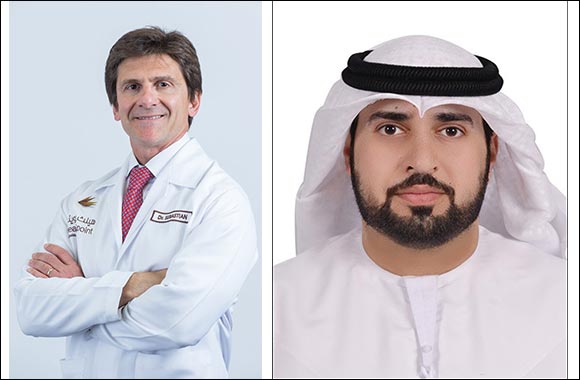 Emirati patient resumes normal activities thanks to an operation undertaken at the Mubadala Health partner, with both the surgeon and the facility certified for excellence by the international Surgical Review Corporation

Abu Dhabi, United Arab Emirates. 28 March 2021: Emirati Majed Abdulla Al Mazrouei, 33, who suffered a complex knee injury that caused him so much pain he couldn’t walk, is now back on his feet and returning to his normal activities thanks to a procedure performed for the first time in Abu Dhabi at Healthpoint, a Mubadala Health partner.

Dr. Sebastian Orduna, the specialist orthopedic and arthroscopic surgeon who led the team in performing the meniscal allograft surgery, says that Majed Abdulla had such severe damage to his meniscus that it had to be removed, which put his knee at risk of future degeneration.
Dr. Orduna explains that each knee has two menisci, and each meniscus is a wedge-shaped disc made of fibrocartilage that, in tandem with its partner, acts as a shock absorber between the shinbone and thighbone. In addition, the menisci serve many important functions such as providing nutrition and lubrication to the knee joint and supporting weight distribution. He says that a meniscus tear is one of the most common knee injuries and can happen to anyone, regardless of age or activity.

Majed Abdulla, who had previously undergone surgery on the same knee following a football injury in 2019, damaged his lateral meniscus again in September 2020 when he fell onto a hard surface during a dizzy spell.
He reports that he went from doctor to doctor seeking a solution as the pain was affecting his quality of life, and he did not like relying on pain killers. The possibility of travelling overseas for treatment was out of the question due to COVID-19-related restrictions. Eventually, he was referred to Dr. Orduna at Healthpoint.

Dr. Orduna explains that because the meniscus is so important to preserving knee health, he always aims to save as much of it as he can in any surgery to prevent future accelerated articular cartilage damage and degeneration of the knee.
However, he says that it is not always possible to save the meniscus and sometimes it needs to be removed, which was the case with Majed Abdulla. This approach presented a problem as removing it would result in a significant increase of pressure in the loading area and it could contribute to the development of pain, cartilage injury and osteoarthritis in the knee on a long-term basis.

“When Majed Abdulla came to see me, he couldn’t perform many normal daily activities because of the knee pain. Due to the severity of the damage, I proposed a meniscal allograft transplantation, which had not previously been available in Abu Dhabi, and which we performed in January this year,” says Dr. Orduna.
Majed Abdulla says, “Although this surgery hadn’t been undertaken in Abu Dhabi before, I was not worried as Dr. Orduna explained that in the US, the surgery had been performed since 1984 with excellent results. I also knew I was in good hands as Dr Orduna is very experienced and both he and Healthpoint are internationally accredited.”

Dr. Orduna is certified by the international Surgical Review Corporation (SRC) as ‘Surgeon of Excellence’ in both Orthopedic Surgery and Minimally Invasive Surgery. In addition, Healthpoint’s ‘Center of Excellence’ certifications include Joint Replacement, Orthopedic Surgery and Minimally Invasive Surgery.
Dr. Orduna says the ideal patient group for a meniscal allograft transplantation includes patients under 40 years of age with knee pain following a past meniscus-removal surgery (a meniscectomy), and who have a normally aligned, stable joint without severe degenerative changes.

He says: “The pain has already reduced dramatically, I am able to walk with a stick, and should be walking normally in four to six weeks from the operation date. I have even been able to drive. I want to share my story so that anyone else who is suffering from this will know it is now possible to have such surgeries performed at right here in Abu Dhabi, in a COVID-free hospital.”

Dr. Orduna says the long-term outlook for Majed Abdulla is very good, as patients internationally report improvement in pain and function in the short, intermediate and long term, with significantly improved outcomes at up to 15 years following the surgery.

United in Ramadan: Celebrate the Essence of Ramadan with Mall of the Emirates a ...