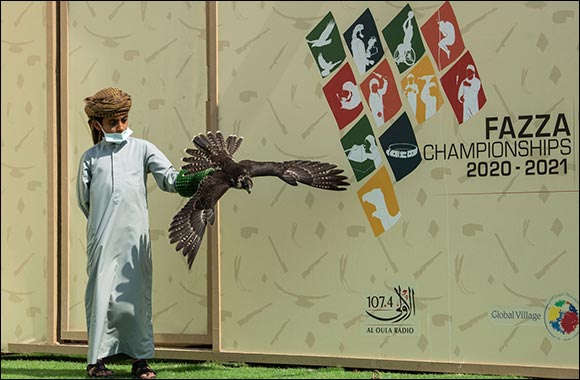 Share Home >> Home, Furniture and Interiors
• 245 falcons compete in the Finals of Fakhr Al Ajyal Championship for Falconry - Juniors Category on Saturday
Dubai, 14 February 2021:  It was a fitting conclusion to the exciting Juniors Category of Fakhr Al Ajyal Championship for Falconry-Telwah, organised by the Hamdan Bin Mohammed Heritage Center (HHC), on Saturday at Al Ruwayyah desert area. A total of 245 falcons competed in the finals and more than 100 Emirati boys and girls – some as young as five years old – have participated to raise the traditional sport of falconry higher.
According to HHC, “falconry defines the UAE’s rich cultural heritage and is a showcase of the intangible Emirati culture. Over the years, with strong support from His Highness Sheikh Hamdan bin Mohammed bin Rashid Al Maktoum, Crown Prince of Dubai, the sport has grown in prestige and popularity.”
Winners
Eight races were held on Saturday. Rashid Hamdan Al-Kindi won in one of the races with his falcon finishing the 400-metre distance with a time of 19.143 seconds. Hamdan bin Mejren Al Marar also topped in another with his bird named Madrid 121 clocking in 17.935 seconds.  Muhammad Omran Al-Nuaimi won first place the third race after his Jirnas falcon finished with 19.333 seconds
Maktoum Marawan Al-Kindi won first place in the fourth with a time of 17.406 seconds. Fifth race with to Majed Muhammad Al Ketbi while his brother, Muhammad Ahmad Al Ketbi, won in the sixth race.
Majed Muhammad Al Ketbi snatched another first place in the Jirnas race after his falcon named ‘Shaddad’ clocked in 20.751 seconds while Sultan Hamad Al-Kindi won the first place in the eight race with his falcon ‘9’ topping the round with 18.726 seconds
Boost to Emirati culture
Tradition is synonymous with the sport. The kids came properly dressed in their national attire, complete with Ghutra (headdress); and as part of the Covid-19 precautionary measures, they also had face mask on.
These young falconers – some as young as five years old and accompanied by their fathers – are a testament that the 2,000-year old tradition of falconry continues to flourish even in the time of social media and online games.  Their keen interest and strong participation will keep the traditional sport alive and growing in the years to come.
The young Emiratis today are showing not only a growing interest in falconry but also how they are truly proud of their national identity. Whenever they come to the event, they wear their national attire – and this is how they strongly promote UAE’s culture to the entire community.
How to train a falcon
Falconry also instills the value of discipline. Training a falcon is not an easy task said nine-year Emirati falconer Khalfan Al Al Qubaisi from Abu Dhabi. “The birds need proper care, diet and special attention,” he said.
Training falcons also boosts the special relationship between siblings, added Khalfan who learned falconry from his older brothers, who in turn learned falconry from their father and uncles.
“We have three falcons and during the racing season we spend most of our weekends training them. Falconry has strengthened our relationship as brothers. We became closer to each other and we learned how to be patient, courageous and have the willpower to win,” he added.
Health and safety protocols
In terms of health and safety, the young falconers have dutifully followed Covid-19  precautionary measures to ensure everyone’s health and safety.