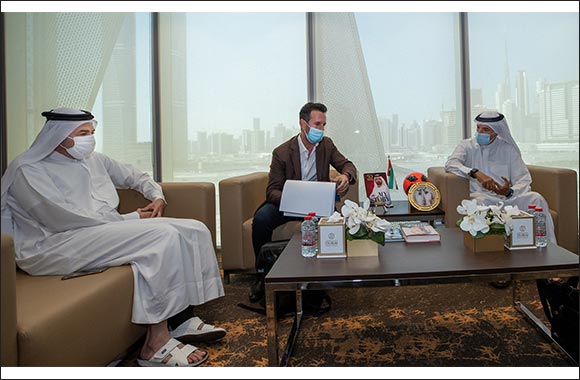 The normalisation agreement between the United Arab Emirates and Israel is a great opportunity to find new friends and new collaborations in this area: Boaz Toshav

Welcoming Toshav, His Excellency Saeed Hareb explained the role that the Council plays in promoting sports at many different levels in Dubai, including the grassroots and community level, in developing the Emirate’s sports sector, in organising and supporting different local and international sports events, as well as in encouraging the private sector and individuals to invest in Dubai’s burgeoning sports sector.

“We are very, very excited to be here in Dubai and visit Dubai Sports Council,” said Toshav as he thanked Dubai Sports Council for the warm reception. “Hapoel Tel Aviv is one of the leading teams in Israel. It has always been supportive of the values of co-existence and for us, the normalisation agreement (between the United Arab Emirates and Israel) is a great opportunity to find new friends and new collaborations in this area.
“We are very, very thrilled with the hospitality we have received here and its’ very exciting for us. Football for us is a tool to bridge gaps and divisions, and we will try to do it through football and through our club.”

Hapoel Tel Aviv were the first Israeli club to sign an Arab player and their list of Arab players includes Rifaat Turk, who went on to become the first Arab to play for the Israel national team and represent the country at the Olympic Games, Salim Tuama and Walid Badir.
Today, Hapoel Tel Aviv have the highest number of Arab players for all age groups as well as the club’s first team, and the club is also affiliated with several initiatives for children that promote equality and opportunities through football.

Both the city-owned stadium of Hapoel Tel Aviv, the 30,000-seating Bloomfield Stadium, as well as their training facility are located in the southern part of Tel Aviv, in the historic port city of Jaffa which has a majority Arab population.

'The Entertainment in T10 is Even Higher than T20,' says Johnson Charles ahead o ...

Qualifications for Saluki Championship 2021 to Start on January 29