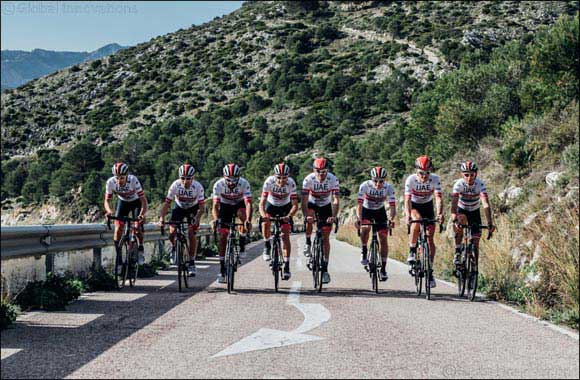 Share Home >> Entertainment
Dubai, United Arab Emirates, August 06, 2020:  For the first time in the history of the sport, the UCI World Tour will host two back to back monuments over the summer, with Milan-Sanremo taking place on Saturday 8th August, followed swiftly by the Tour of Lombardy on Saturday 15th August.
The first of the season’s monuments – the name given to five of cycling’s most prestigious one day races – will see UAE Team Emirates take on a 299km route from Milan all the way down to the Italian coastal town of Sanremo. The race will culminate with its traditional finale featuring the iconic climbs of the Cipressa and the Poggio before a fast, but technical 5km decent down to the line; a finish that could suit the team’s sprinter Fernando Gaviria.
Fernando Gaviria said: “The victory in Burgos was a great boost for both the team and for my confidence and shows my condition is good. We expect a bigger challenge at Milan-Sanremo and the competition will be strong. This is one of my favourite races and if it finishes in a sprint I know I can be one of the favourites”
Gaviria will go into battle with a star studded squad that has additional options for the race including Alexander Kristoff, Tadej Pogacar and David Formolo, along with lead out man Max Richeze and rouleur Oliviero Troia.
The following weekend, a squad built for more lumpy terrain will head to Il Lombardia - a 243km race from Bergamo to the beautiful lake side town of Como.
Fabio Aru will lead a team that features four of his Italian countrymen in form of Valerio Conti, Diego Ulissi, Edward Ravsi and Alessandro Covi - along with Brandon McNulty and Aleksandr Riabushenko.
Wedged in between the two monuments is Gran Piemonte (August 12th), a 187km one day Pro Tour race from Santo Stefano Balbo to Barolo. Aru will rely on the same team as he will for Il Lombardia with just one change that sees Cristian Munoz ride in the place of Brandon McNulty.