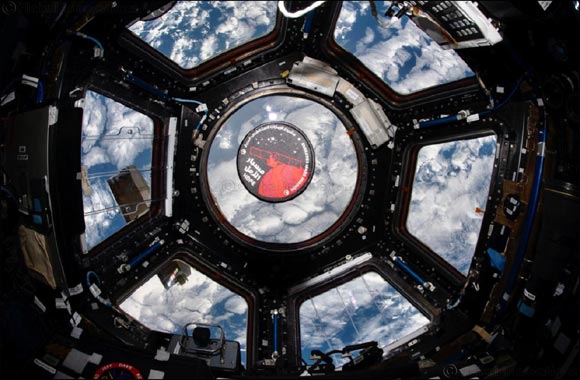 Dubai, UAE, 05 July 2020:  In a nod to the Emirates Mars Mission “Hope Probe’s” countdown to its launch and the fulfillment of an Arab-Islamic dream, a photo of the mission’s logo onboard the International Space Station (ISS) was shared by Emirati Astronaut Hazzaa AlMansoori on his social media accounts. The mission’s logo will now travel to Mars onboard the first inter-planetary Arab-Islamic probe.

Ever since the UAE was established, the Late Sheikh Zayed has always inspired his countrymen to aim for the stars. Keeping the promise of the Founding Father of the UAE, the Emirati youth set out on the ambitious target of literally reaching for the stars, a dream that some considered distant. But, after Emirati Astronaut Hazzaa AlMansoori launched into space last year, it doesn’t seem so far off. It has in turn paved the way for the next generation to take on bigger challenges and pursue a higher passion for success.

The UAE’s achievement in sending the first Arab Astronaut to the ISS was just the first step in the country’s ambitious journey towards Mars, as documented by Hazzaa AlMansoori when he clicked this photo in space. The UAE has entered the global race to explore outer space through the Emirates Mars Mission “Hope Probe”, that was developed in a record 6 years. It is the first Arab project to explore other planets, and it carries a message of hope for all the people of the region to revive the rich history of Arab and Islamic achievements in science.

In the social media message by Emirati astronaut Hazzaa AlMansoori, he said, “After 10 days, the first Arab-Islamic interplanetary mission will carry this logo again to space... It will be taken farther than the ISS... to Mars. This is how hope leads us… to maximise our ambitions and achievements. The picture shows the logo of the Emirates Mars Mission “Hope Probe” on the ISS.”

'The Entertainment in T10 is Even Higher than T20,' says Johnson Charles ahead o ...

Qualifications for Saluki Championship 2021 to Start on January 29