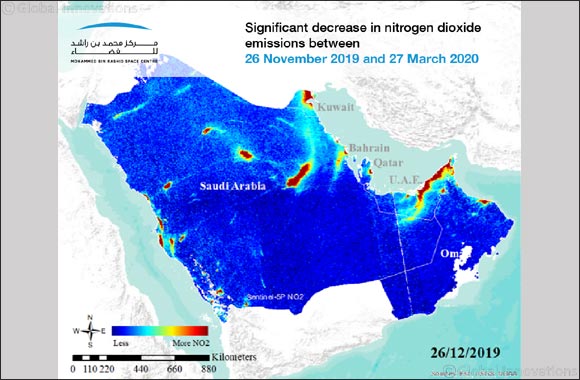 MBRSC Releases GIF Image Showing Decline of NO2 in the GCC

Dubai, UAE, 01 April 2020:   The Mohammed Bin Rashid Space Centre (MBRSC) released a GIF image of the decrease in nitrogen dioxide (NO2) concentration in the GCC countries, between 26 November 2019 until 27 March 2020.

The Remote Sensing Department at MBRSC published the results using data acquired by the European Space Agency's Sentinel-5P mission. The drop in NO2 concentrations beginning late-February coincides with the regionwide precautionary measures taken to prevent the spread of coronavirus 'COVID-19'.

Nitrogen dioxide is mainly produced from engines, power generation and other industrial processes, according to the World Health Organization (WHO). In view of the lockdown announced in various countries, fewer vehicles are on the road, fewer planes are taking flight and industries have also been affected over the period. This has led to the decline in NO2 concentrations, which in turn has improved air quality.


United We Stand Among Independents Through Unprecedented Collaboration

Womanity Reshapes the Narrative Around Women in the MENA Region

Glory for Dubai's Godolphin in Australia

With the Global Crisis being Experienced, France does not lose Sight of Success

DHL Partners With Tabby to Offer Online Retailers a Simpler Alternative to Cash ...