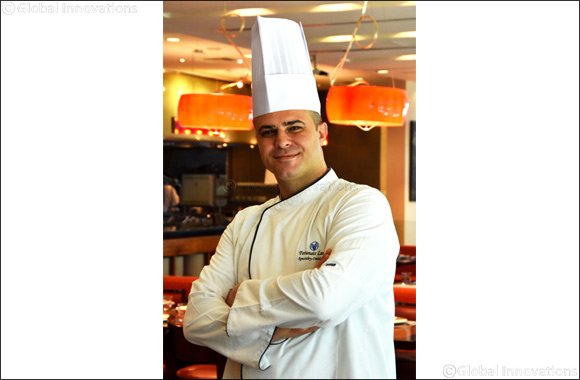 Dubai, 27 February 2020:   Media Rotana, Dubai, is pleased to announce the appointment of Fortunato Leocata as its new Chef.

With almost two decades of experience, Fortunato is definitely a valuable asset!

Fortunato’s vast experience comes from his passion at a very young age cooking with his mother, which paved his way to transforming cooking into real art. One of his many milestones was serving for a decade in UK, serving his unique dishes while working with various reputable hotels. He didn’t stop at land, but also embarked on a culinary journey on a cruise ship for almost a year; it was a beautiful and eye-opening experience says Fortunato. The same ship docked in Dubai, introducing him to the glamour of the UAE.

Not only is Fortunato a world-class chef, but he’s also a successful leader equipped with holistic F&B knowledge and management expertise, such as coaching and leading culinary team members.

In his own words, “My journey still continues with ever-gaining experience in terms of pre-opening and effective operations”.

Coming from Catania – Sicily in Italy, Fortunato is well-equipped with a IV Degree education classification from College of Catering - INSTITUTO PROFESSIONALE ALBERGHIERO DI STATO. Additionally, Fortunato is a man of many cultures, he surely speaks Italian, alongside Spanish, Portuguese, French and English.

Aside from his two decades of experience, Fortunato is highly trained in many courses such as food hygiene training, civil defense fire safety training, first aid training and person in charge level 3 training.

Fortunato is no stranger to Rotana, he’s been a part of the big family since 2017, he still has his culinary passion and is totally excited about his new position as he looks forward to bringing further success to Rotana.

Next in Food Industry

The Key to Healthy Hair with VIERRO

Marks & Spencer Introduces its Kidswear Collaboration with Roald Dahl™ and The N ...

SCCI Discloses Details of its Online Services Statistics in March

Medical Cadres to Are the Front Line of Defense to Maintain the Health and Safet ...

At Home with Galaxy: How to Stay Active and Fit

3D-Printed Protective Visors for NHS Staff on the Coronavirus Frontline