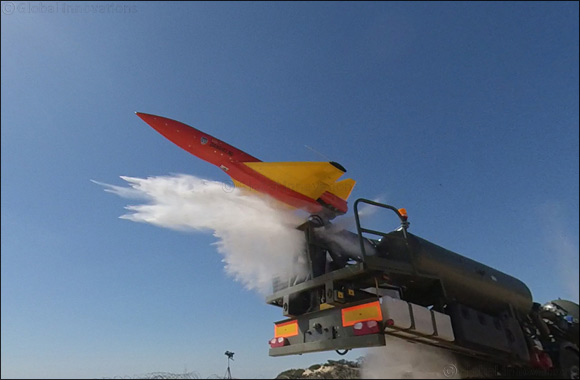 The Next Generation (NG) Banshee is an aerial target used for training, capable of speeds of up to 250m per second and reaching heights of over 12,000 metres.  This complements the range of autonomous and unmanned vehicles Houbara is presenting at the show, including the supersonic missile target, the Rattler, capable of speeds exceeding Mach 2.4, and specifically designed to replicate the threat posed by anti-ship or ballistic missiles.

Houbara Defence was established two years ago as a joint venture between Middle East General Enterprises (MGE) and the UK’s QinetiQ plc, a specialist in technology and sophisticated defence solutions, with the aim of providing threat replication services to the UAE Armed Forces. More recently Houbara invested in an assembly facility for target systems at Tawazun Industrial Park with the goal of growing its regional manufacturing capability in the UAE.

Saeed Ghanim Al Ali, Chairman of Houbara, said: “These new targets are being offered to the UAE Armed Forces to replicate the very latest threats they face in keeping us safe on a day to day basis. By introducing more of our capabilities to the market, we will build local capacity in the defence sector, and increase training and skills development opportunities for both the UAE military and the industry that supports them, reflecting the goals set out by our leadership in Vision 2021.”
Also on display at UMEX 2020 is the Snipe target, a smaller fixed-wing UAV which provides realistic training against the drone threats that have emerged in recent years, together with the highly successful Counter-IED robot, Talon. Houbara will continue to combine QinetiQ’s proven expertise in developing autonomous systems and robotics, of which the target systems form only one part.

Tim Allen, CEO of Houbara said: “We are delighted to be participating at UMEX 2020 and bringing new capabilities to the UAE. Since our incorporation in 2018 we’ve focused on adding value to the UAE Armed Forces in terms of their training and preparation for the complex missions they face – both today and tomorrow. These new systems demonstrate Houbara’s solid commitment to continuing to do that into the future.”


Eid Gifts From The Body Shop

Made in Italy, ICSA® Issues a Notification of Counterfeit Products Found in the ...

Ralph Lauren: How to master the art of tie-dye. #RLatHome

Emirates Sets Industry-leading Safety Standard for Customers Travelling as It Re ...

The Heart of Europe Takes Shape as the Ultimate Sustainable Island Tourism Desti ...

Mubadala Supports the Fight Against COVID-19 by Leveraging Its Assets' World-Cla ...