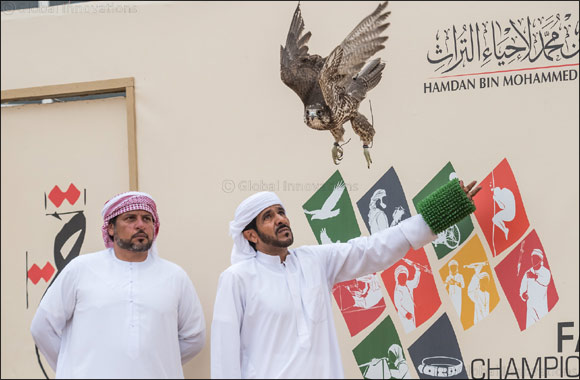 Elite falconers from across the UAE joined in the competition and Sheikh Hamdan’s birds named ‘Youth’ and ‘Shayboub’ topped the races in the Jirnas (falcons over one year old) classification.

In a generous move, the Crown of Prince of Dubai gave the prize money to the second placers.  The gesture was seen as an inspiring motivation for falconers to continue excelling in the heritage sport.

The falcon named ‘Youth’ covered the 400-metre distance in 17.7 seconds, far ahead of second-placer bird called ‘Peugeot’ that clocked in 18.365 seconds, and followed closely by Mansour Ali Musabbah Al Ketbi’s bird in third place with a time of 18.418 seconds.

Rashid Mubarak Bin Markhan, Deputy CEO of the HHC, said: 'The Fazza Championship for Falconry-Telwah has grown rapidly and extensively through the years – thanks to the generous support and inspiration by His Highness Sheikh Hamdan Bin Mohammed Bin Rashid Bin Saeed Al Maktoum, Crown Prince of Dubai.”

Rashid Bin Markhan, Deputy CEO of HHC, thanked Sheikh Hamdan for his generous support in promoting the traditional sport of falconry in the UAE.

Souad Ibrahim Darwish, Director of Championships said: “We are proud of His Highness’s continuous efforts to compete with his falcons during the championships, raising the level of competitions with new speed records that set new goals and inspires falconers”.

ICSFS Sets a New Standard of Scalability and Proofs Viable Solutions for the Lar ...

Calling All Mommies to Take a FIKA Break With IKEA

FireEye - Statement on Russian Cyber Attacks to Country of Georgia

Maserati MC20: The Name of the New Super Sports Car of the Trident Brand is Ann ...

MC20: The Name of the New Maserati Super Sports Car Climbs Aboard the Maserati ...

‘Be Inspired' This Season With JYSK's Latest Collection