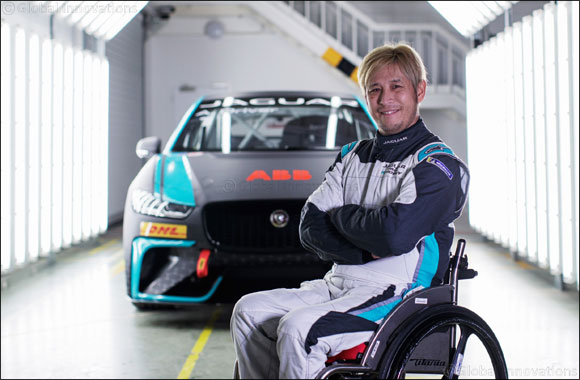 Share Home >> Automobile
• Takuma Aoki will race for Team Yokohama Challenge, the new Japanese-based eTROPHY team
• The former motorcycle racer, who was involved in an accident in 1998 resulting in paralysis from the waist down, will drive a specially adapted Jaguar I-PACE eTROPHY racecar
• The Japanese racer will create history as the first disabled person to compete in an international electric race
• Jaguar Land Rover’s Special Vehicle Operations (SVO), Italian-based GuidoSimplex and M-Sport have modified the eTROPHY car with specially designed hand-controls
• Jaguar I-PACE eTROPHY – the world’s first all-electric touring car race series returns for round three in Mexico City on 15 February 2020
Dubai, UAE, 9 February 2020: Takuma Aoki, former World Superbike and Grand Prix motorcycle road racer, joins the Jaguar I-PACE eTROPHY racing for Team Yokohama Challenge. The Japanese racer will create history as the first disabled person to compete in an international electric race series from round three in Mexico City on 15 February.
Aoki became paralysed from the waist down after an accident in 1998, a year after he finished fifth overall with Honda in the 500GP class. Since then, Aoki has remained involved in motorsport and has competed with success on four wheels using specially-modified vehicles in both the 2009 Dakar Rally and 2016 Asia Cross Country Rally.
He most recently competed in the 2019 Michelin Le Mans Cup – LMP3 category and for La Filière Frédéric Sausset by SRT41 in the 2019 Road To Le Mans competition, part of the support package for the 2019 Le Mans 24 Hours.
For his first experience in electric racing, Takuma will drive a specially-modified Jaguar I-PACE eTROPHY. A Guido Simplex America Lever actuator has been fitted to the steering column mount with bespoke bracketry and modifications designed and developed by Jaguar Land Rover’s Special Vehicle Operations (SVO), M-Sport and Takuma's race engineering team. Modifications to the pedal box position have been made to increase efficiency of lever based brake actuation and a bespoke 'pull type' actuation from the throttle to utilise the eTROPHY electronic throttle control. The unique design uses cable actuation of the existing pedal for easy modification to the Jaguar I-PACE eTROPHY racecar.
Takuma Aoki, Team Yokohama Challenge driver said: “I am very excited to be joining the Jaguar I-PACE eTROPHY with Team Yokohama Challenge for my first competition in electric racing. Everybody is a challenger in life but I can now prove once more that life is not ending and you can still challenge your dreams even if you are paralysed. I want to thank the Jaguar Racing engineering team, GuidoSimplex and M-Sport for their hard work on modifying the car, I can’t wait to be competing in Mexico City alongside some experienced racers.”
Mark Turner, Jaguar I-PACE eTROPHY Series Manager said: “We are very pleased to welcome Takuma to the Jaguar I-PACE eTROPHY. Throughout his career he has shown resilience and delivered competitive racing performances, which no doubt will continue as he ventures into electric racing for the first time.”
Adam Jones, Jaguar I-PACE eTROPHY Vehicle Engineering Manager said: “Adapting the Jaguar I-PACE eTROPHY to be driven with hand controls was an exciting challenge for SVO. Working alongside Takuma’s race team and M-Sport we have delivered a package that will enable Takuma to transition competitively into the eTROPHY race series. It has been a great collaboration and demonstrates the progressive and innovative engineering behind the Jaguar I-PACE eTROPHY.”
After a thrilling double header opening weekend in Diriyah in November 2019, with Sérgio Jimenez and Simon Evans securing the first two wins of the season, the Jaguar I-PACE eTROPHY returns for round three in Mexico City on Saturday 15 February at 14:00 local time as the official support race to the ABB FIA Formula E Championship.

Dubai Chamber Commemorates 100 Years of the International Chamber of Commerce

Customers to Benefit From Increasing Gold Rate by Just Paying 10% Advance at Mal ...

Trade Bank of Iraq Showcases Investment Opportunities in Iraq at Global Trade Re ...