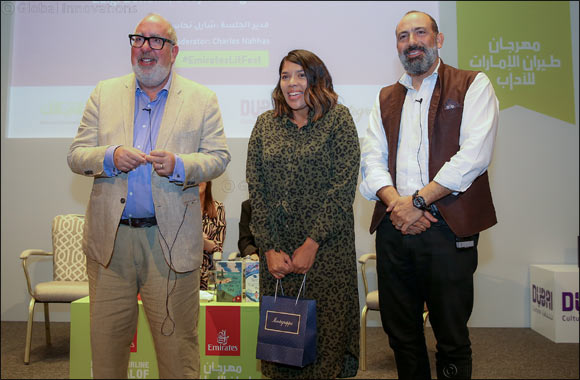 Dubai, UAE, 8 February 2020:   The winners of the Montegrappa Writing Prize, the Emirates Airline Festival of Literature’s prestigious competition to discover unpublished novelists, have been announced today. Recognised as one of the most successful writing competitions in the region, the competition has a proven track record in finding new writing talent, producing nine published authors in the last six years.

This year’s first place went to Stacey Siebritz for The Leap. The runners up were:
Nassma Al Bahrani: The Stars Among Us
Celina Teague: The Uncoming of Age
Michael Lynes: Blood Libel
Priyanka Pradhan: Stories from the Himalayas

They were both discovered as a result of entering the competition and joined Bonomi on the stage to discuss their paths to writing success.
“This competition provides aspiring writers with a real chance of getting their work noticed,” said Bonomi. “The fact that so many finalists have won publishing deals in the past shows how high the standard of writing in the region is. Every year I am astonished by the level of skill and imagination that we discover and I hope that this year’s crop of talent will go on to join our list of published authors.”

Novelists that have never been published are eligible to enter, providing that they are 21 years or older and resident in the UAE, Bahrain, Kuwait, Oman or Saudi Arabia.  Entrants had to submit a 400-word synopsis of the book in English and the first 2,000 words of their almost completed manuscript.

The winner of this year’s competition will have a chance to build their own luxury fountain pen using Montegrappa’s new online configurator, which gives millions of options for customization of all elements of the pen, allowing them to create a completely original and personalised writing instrument. Although a publishing deal is not guaranteed, the winner of the Montegrappa Prize also wins the chance to discuss their manuscript with Luigi Bonomi, as well as a two-night stay at a five-star hotel in Dubai, and a copy of the current Writers’ and Artists’ Yearbook.

The runners-up receive exclusive Montegrappa fountain pens from the special edition Mandela collection with a retail value of Dhs 1,450 each, and copies of the current Writers’ and Artists’ Yearbook.

Montegrappa is Italy’s oldest manufacturer of hand-crafted writing instruments. Charles Nahhas, Montegrappa’s Middle East distributor said: “This competition is a huge success story for the region in producing new writing talent and putting them on the path to becoming recognised and published. We are proud to have been able to make this happen through sponsorship of the competition and help  discover the next generation of writers.”

The Festival is held with Founding Partners Emirates Airline and the Dubai Culture & Arts Authority (Dubai Culture), the Emirate’s dedicated authority for heritage, arts, and culture.

The Emirates Airline Festival of Literature is held under the patronage of His Highness Sheikh Mohammed Bin Rashid Al Maktoum, Vice-President and Prime Minister of the United Arab Emirates and Ruler of Dubai.

Kibsons Presented with a Token of Appreciation by Humaid Bin Rashid Alnuaimi Fou ...

Hamdan Bin Zayed Issues Directives for the Conservation and Propagation of the N ...

‘Return to UFC Fight Island Will Go Down in History'

Etihad Airways Celebrates Its Pledge To the Kingdom of Saudi Arabia on Their 90t ...